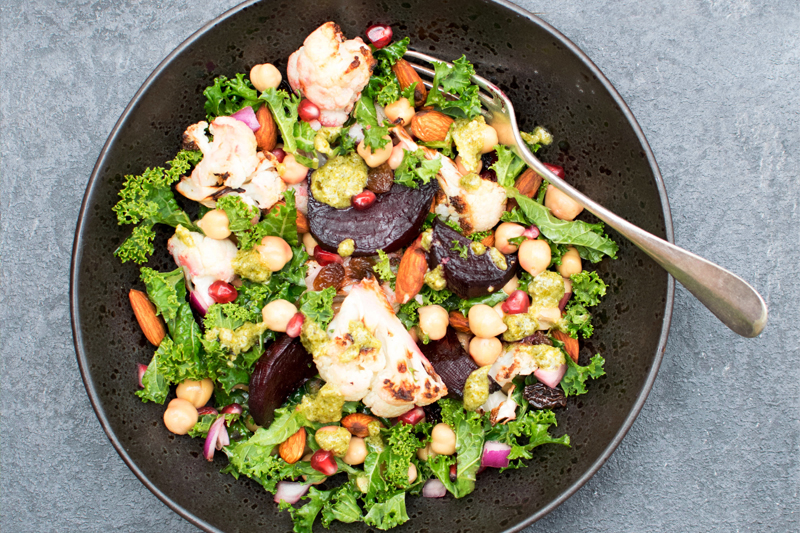 Bursting with wonderful flavours, this Beetroot & Cauliflower Kale Salad with Pesto Dressing is the perfect antidote to the grey weather. The seasonal Winter vegetables are tossed in a delicious pesto dressing made with SACLA’ Free From Basil Pesto and topped with crunchy almonds, juicy pomegranate and sweet raisins. So good!

Full recipe on The Flexitarian. 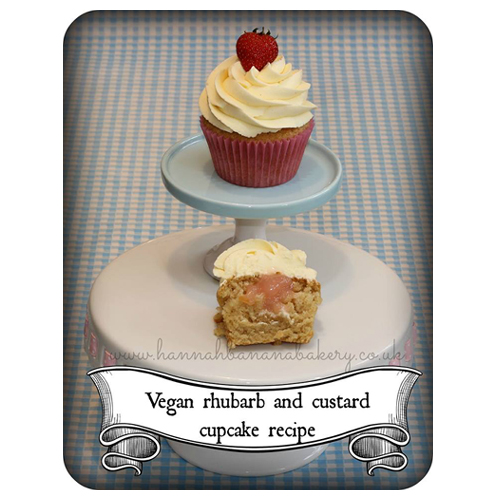 Congratulations to Hannah Banana Bakery who will receive a £50 voucher to spend at By Nature.

Our aim here was to show that vegan food is appealing, diverse and delicious even if you are not vegan.

As we all need to reduce our consumption of animal products we encourage everyone to try going vegan once in a while.

This World Vegan Month we are celebrating vegan food by sponsoring a competition on The Flexitarian.

“Feast Your Eyes on Vegan” aims to showcase the best looking vegan dishes, to spread the word about vegan food and show how good it can look (and hopefully get people to try it).

So if you are a vegan cook, blogger etc.. send your entries at hello@theflexitarian.co.uk. Your entry should include a high quality picture and web link to the recipe (see competition rules below for more details).

The entries will be displayed on The Flexitarian blog. During the last week of November voting will be open to select a winner and runners up!

Winner and runners up will be showcased on both The Flexitarian & By Nature blogs and social networks. The winner will receive a £50 voucher to spend at By Nature.

So if you are you ready to show the world what vegan food is about let’s get cooking.

Competition Rules:
Vegan Dishes only.
Please submit high quality pictures in jpeg of at least 500 x 500 pixels.
All images submitted should include a URL on where to find the recipe.
If there is no URL please send the picture and recipe to hello@theflexitarian.co.uk
Entries accepted until November 24th midnight (GMT).
Voting open from November 25th to November 29th midnight (GMT).
Winner to be announced on November 30th.

Let’s talk about Food, Health, Ethics and the Environment. 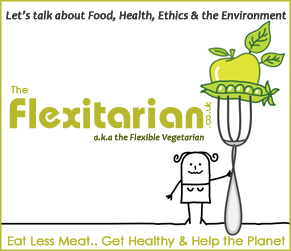 So chuffed to learn The Flexitarian’s vegan Apricot Tart is a finalist of PETA’s The Great Vegan Bake-Off .

This was one of the first vegan dessert and it is facing stiff competition!

There are some great entries proving just how EASY and DELICIOUS vegan baking is, and that animal products aren’t needed in the kitchen.

You can see the list of contenders here and vote for your favourite!

There is one week of voting, which ends on 31 October. The entry with the most votes will be crowned the winner and announced on 6 November!

Reblogged from Peta – There are so many delicious vegan baked goods, such as doughnuts and apple strudel, on supermarket shelves, but sometimes homemade treats really take the cake.

So Peta are launching The Great Vegan Bake Off, a search for the most mouth-watering vegan baked goods in Britain and Ireland! Preheat your oven and start planning your pies, cakes, scones, biscuits or whatever else you bake best. If you are new to vegan baking, don’t worry – check out PETA US’ database of delicious recipes to inspire you.

Entering is easy – just bake something that looks delicious and is free of animal products and either post the recipe and pictures on your blog or website and send the URL to Contest@peta.org.uk or e-mail the picture and recipe directly to Peta. Please put “VEGAN BAKE-OFF” in the subject line and enter before 20 October at 12 midnight.

Peta will pick the baked goods they think look the tastiest and post a blog with all the finalists on 24 October. Then, there will be two weeks of voting, ending on 31 October. The entry with the most votes will be crowned the winner and announced on 6 November! The winner gets bragging rights for being Peta’s choice for greatest vegan baker, along with the warm and fuzzy feeling that comes from sharing his or her delicious recipe with the world.

Following its success in Brighton and Bristol, VegFest UK is making its London debut on October 5th and 6th 2013 at Kensington Olympia.

If you are interested in all things vegetarian and vegan, this is the show for you and we have 10 pairs of tickets up for grabs.

To win one of the 10 pairs of tickets we have available, simply sign up to our newsletter in the “Stay in Touch” box at the bottom of this Flexitarian’s post. Winners will be selected at random on September 9th and announced both on our sister site The Flexitarian‘s  Facebook page and Twitter page.

VegFest London brings under one roof up to 180 stalls all full of the latest vegetarian and vegan products plus cookery classes, a Living Raw prep zone, talks and presentations, yoga workshops, live comedy and music, kids’ activities, a celebrity quiz, all led by top entertainers and experts in healthy living and self-development.

There’s also a screening of award-winning documentary ‘Simply Raw: Reversing Diabetes in 30 Days’, and a chance to meet your favourite experts in one-to-one sessions throughout the show. Everything at the event is 100% plant based – no animal products permitted.

Ensuring visitors to the event are spoiled for choice, many of the stalls will be providing free samples and tasters as well as produce at vastly reduced costs.

Eating habits are changing and with new choices come new “labels”. Whichever diet you follow is a matter of personal choice and ethics. Yet our current eating habits are not sustainable and there is no doubt that our diet will need to become more plant based.

Let’s explore some of the options….

Vegetarian: a vegetarian has a plant based diet (ie not meat or fish) but does eat dairy and eggs.

Vegan: a true vegan will not eat any animal product (no meat, fish or dairy). More restricting that vegetarianism but there are many plant based dairy substitutes.

Flexitarian: this is a semi-vegetarian diet which is becoming increasingly popular for people who still want to eat fish or meat from time to time. Followers of the “Meat Free Monday” campaign belong to this category.

Pescatarian: a pescatarian is a semi-vegetarian and  does not eat meat but eats fish, seafood and shelfish

Pollotarian: a pollotarian is also a a semi-vegetarian diet which excludes red meat but pretty much everything else.

Kale Salad with Pinenuts, Currants and Parmesan
(via Epicurious)

Makes 12 slim but intense slices, or 8 if you’re feeling outrageous! 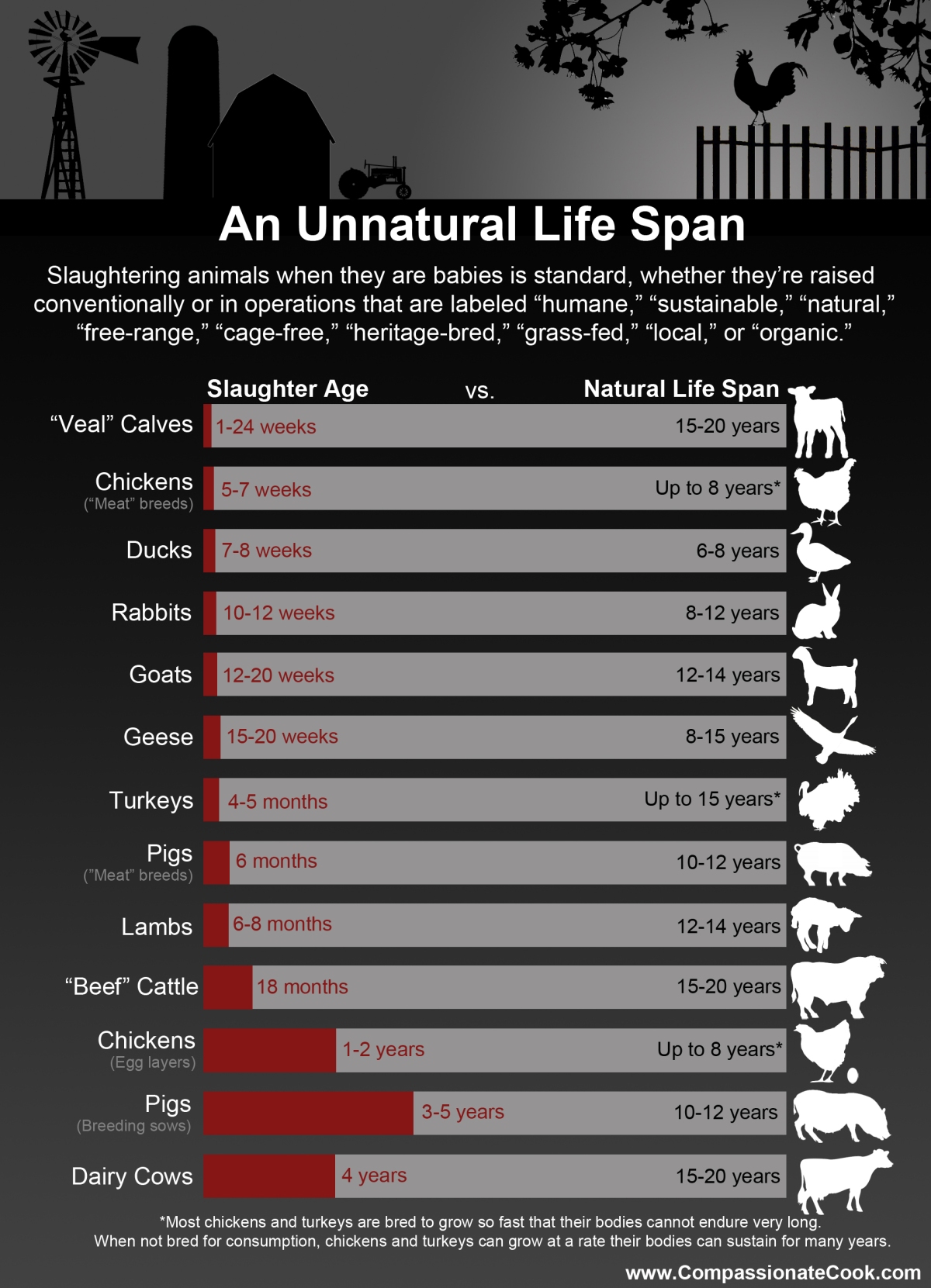 This is reblogged from The Compassionate Cook.

“I have yet to meet a non-vegan who doesn’t care about the treatment of animals bred and killed for human consumption. Even people who eat animal-based meat, aware on some level that the experience is unpleasant for the animals, will tell you they object to unnecessary abuse. Nobody wants to support cruelty, and nobody wants to believe they’re part of it. Instead, they declare that they buy only “humane” meat, “free-range” eggs and “organic” milk, perceiving themselves as ethical consumers and these products as the final frontier in the fight against animal cruelty.

We bring into this world (only to kill) over 10 billion land animals every year just to please our palates and honor the status quo, yet we never question the absurdity of this societal ritual. Instead, we absolve ourselves by making what we think are guilt-free choices, failing to recognize the paradoxical impossibility of “humane slaughter” and also ignoring huge steps in the cradle- (domestication)-to-grave (our bodies) process.

The unappetizing process of turning living animals into butchered body parts begins at birth and ends in youth – whatever they’re raised for and however they’re raised. Relative to their natural life span, most of the animals are slaughtered when they’re still babies, as illustrated in the graphic above. (And this graphic doesn’t even include the millions of male chicks killed upon hatching at egg hatcheries every year. Males, after all, don’t produce eggs and are thus worthless to the egg industry.)

When we tell ourselves we’re eating the flesh and secretions from “humanely raised animals,” we’re leaving out a huge part of the equation. The slaughtering of an animal is a bloody and violent act, and death does not come easy for those who want to live.

The fundamental problems we keep running into do not arise merely from how we raise animals but that we eat animals. Clearly we can survive—and in fact, thrive—on a plant-based diet; we don’t need to kill animals to be healthy, and in fact animal fat and protein are linked with many human diseases.

We know this. We know it instinctively, and the medical research supports it.

What does it say about us that when given the opportunity to prevent cruelty and violence, we choose to turn away—because of tradition, culture, habit, convenience, or pleasure? We are not finding the answers we are looking for because we are asking the wrong questions.

The movement toward “humanely raised food animals” simply assuages our guilt more than it actually reduces animal suffering. If we truly want our actions to reflect the compassion for animals we say we have, then the answer is very simple. We can stop eating them. How can this possibly be considered anything but a rational and merciful response to a violent and vacuous ritual?

Every animal born into this world for his or her flesh, eggs or milk—only to be killed for human pleasure—has the same desire for maternal comfort and protection, the same ability to feel pain, and the same impulse to live as any living creature. There’s nothing humane about breeding animals only to kill them, and there’s nothing humane about ending the life of a healthy animal in his or her youth.

(Moved by this? Please share this post or just the graphic to raise awareness and/or join The 30-Day Vegan Challenge to be part of the solution.)

Click here for the JPG version of the graphic.